PFLAG is a national non-profit organization with over 400 chapters and 200,000 members and supporters.  Founded in 1972 with the simple act of a mother publicly supporting her gay son, PFLAG is the nation's largest LGBTQ+ family and ally organization.   PFLAG is committed to advancing equality and achieving full societal affirmation of LGBTQ people through its threefold mission of support, education, and advocacy. 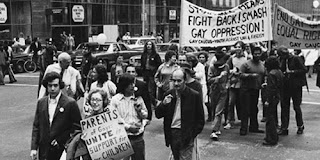 The PFLAG DuPage chapter was formed in 2004 when members of the Hinsdale chapter decided we needed support in the far west suburbs of Chicago.  The first Chapter meeting was held in January of 2004.  We have met without fail at St Paul Lutheran Church every third Sunday since that date.  The chapter has alway been dedicated to providing compassionate support, quality educational programs and strong advocacy for equal rights.

Our Vision
PFLAG envisions a world where diversity is celebrated and all people are respected, valued,and affirmed inclusive of their sexual orientation, gender identity, and gender expression.

Our Mission
By meeting people where they are and collaborating with others, PFLAG realizes its vision through:

Everyone is welcome at our monthly support and education meetings. Our meetings are at 2pm the third Sunday of each month at St Paul Lutheran Church in Wheaton IL.
Until the foreseeable future, all meetings will be held online. Please email us at PFLAGDuPage@gmail.com for a link to our next meeting

It Had to Be You
by Timothy James Beck

The Meaning of Matthew: My Son's Murder in Laramie, and a World Transformed
by Judy Shepard

The Misfits
by James Howe